The building projects at Mount Calvary evolved over several years.  The first project was the sanctuary remodeling and exterior wall renovations.  In the sanctuary, the chancel and choir area was reconfigured to work together better and to resolve some of the use issues that had been concerns since the original construction.  Dark wood beams were covered with sheetrock and painted white so that the entire sanctuary became brighter and lighter.  Lighting was also upgraded and all of the flooring was replaced.

The second project involved the narthex and entrance.  Prior to this project, many Mount Calvary members suffered from claustrophobia due to the very low narthex ceiling and small area. (not really!) We helped them expand their narthex in area and height by designing a clerestory atrium that extends from the new main entrance to the sanctuary entrance. The narrow stairway was replaced with a wider, more open stairway that helped invite people to the lower level.  A new elevator was installed that allowed the building to become fully accessible and connected three major levels together.   The project also included office relocation, a new nursery, and re-roofing of much of the building. 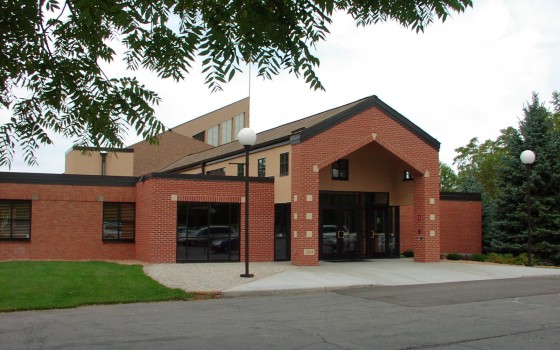