Project goals included increasing education space, improving hospitality, and improving traffic congestion.  To increase classroom space a former, upper level multi-purpose space was reconfigured into four permanent classrooms.  Two new, large classrooms were built atop the existing office wing, a project that had been attempted twice before but fell short because of funding.  Also in the classroom area, a ramp was reconfigured and a set of restrooms were installed for classroom participants.

Work on the main level included filling in an exterior courtyard to create a wonderful gathering space that connected east and west entrances and provided an informal space to sit and mingle.  A kitchenette was installed between the new gathering space and a remodeled meeting room so that it could serve both functions.  One of the bigger changes was the addition of a new, open stairway.  With glass on it’s exterior walls, the stairway opened up all three levels and made it more inviting to use the lowest level and access the upper level.  Two new entrance canopies were also constructed to invite people into the building.

An interesting story about the courtyard; a pair of mallard ducks flew into the courtyard every spring to raise their brood.  At the proper time, church staff had to open the doors to allow mom and ducklings to exit the courtyard for the year. 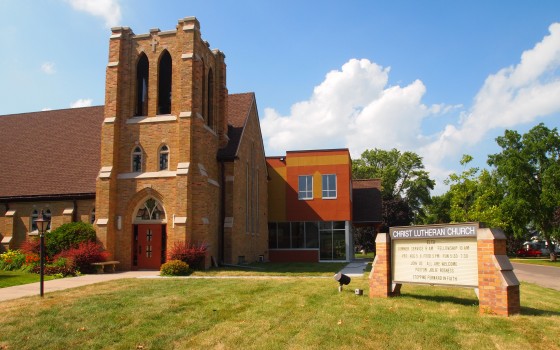