Members of Faith Lutheran Church had already expanded their original sanctuary three times when it was decided they needed even more space.  The new sanctuary was designed to open and light, a contrast from the type of space they were using.  The hip roof design was used to accentuate the participatory unity of the congregation, be reflective of the half-round seating layout, and minimize hierarchy.

Adjacent to the sanctuary is a large, new gathering space that extends to the west to connect with the existing building.  A large canopy extends from the gathering space and invites people into the building.  At the end of the canopy is a lengthy drop-off drive which is a great convenience for worshipers and wedding parties.

The old sanctuary was divided up as best as possible with chapel, nursery, and classrooms.  Added as an Alternate Bid was a new fellowship hall/gymnasium.  The fellowship hall has a good connection to the classroom wings and the new gathering space.  The exterior facade of the new addition uses a combination of rock-face concrete block with brick bands.  The roof of the sanctuary is a long-lasting standing-seam metal roof. 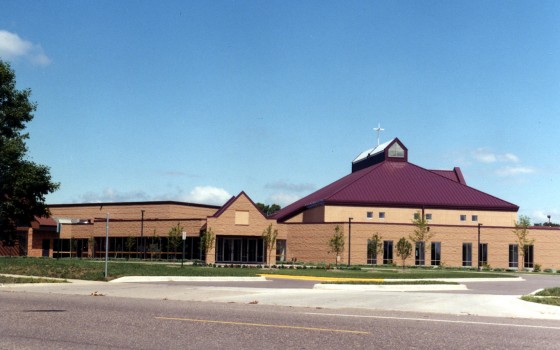